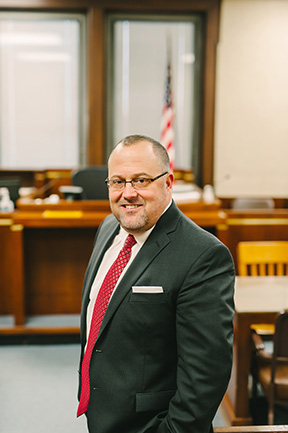 Philosophy
Joe believes in protecting and fighting for the rights of the people who work hard and expect to be treated fairly. He can arrange appointment times that are flexible and meet your needs. He works to make sure that complicated legal processes and language are clearly communicated and understood. He believes that your questions and requests for information should be handled promptly. He believes that by listening to you he can more effectively represent you. And, he never expects to be compensated more than his clients.
Education
Joe Dunn grew up in Pekin, Illinois. He graduated from Pekin Community High School in 1983. His father was a heavy equipment operator and his mother worked in the cafeteria of the High School. Joe enlisted in the United States Navy at 17, obtaining the rank of E-5 (Petty Officer Second Class).Utilizing the G.I. Bill, Joe graduated from the University of Illinois in 1992 with a Bachelor of Science degree and from Southern Illinois University School of Law in 1995 with a Juris Doctorate degree.
Experience
Joe began his legal career in Bloomington, Illinois and practiced at the law firm of Costigan & Wollrab P.C., for five years. While there, Joe defended insurance companies and their insureds. He then worked at the Janssen Law Center for 12 years and was responsible for handling and trying hundreds of serious injury and death cases on behalf of individuals. In 2013, Joe joined Prusak, Winne, McKinley & Dunn with offices in Pekin and Peoria, Illinois.In 2014, Joe established The Law Offices of Joseph W. Dunn based in Pekin, Illinois.

Listed with the Martindale-Hubbell Law Directory with an AV Preeminent rating, the highest rating available for ethics and legal ability, and has been designated by judges and his professional colleagues as preeminent in his field. For more than 130 years, lawyers have relied on the Martindale-Hubbell AV Preeminent rating while searching for their own expert attorneys. This rating represents the pinnacle of professional excellence for an attorney.

Recognized by Super Lawyers, a rating service of outstanding lawyers from more than 70 practice areas who have attained a high-degree of peer recognition and professional development. According to Chicago Magazine, those named to the Super Lawyers list represent the top 5% of their profession.

Selected by The National Trial Lawyers as one of the “Top 100 Trial Lawyers.” The National Trial Lawyers: Top 100 is an invitation-only organization composed of the premier trial lawyers from each state in the nation who meet stringent qualification as civil plaintiff and/or criminal defense trial lawyers. Selection is based on third party research. Membership is extended solely to the select few of the most qualified attorneys from each state who demonstrate superior qualifications of leadership, reputation, influence, stature and public profile.

Certified as a lifetime member of The Million Dollar Advocates Forum. The Million Dollar Advocates Forum is recognized as one of the most prestigious groups of trial lawyers in the United States. Membership is limited to attorneys who have won millions and multi-million dollar verdicts, awards and settlements. Fewer than 1% of U.S. lawyers are members.