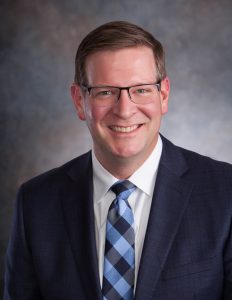 Scott’s great great grandfather immigrated from Germany in the 1860’s to Pekin, Ill.  He worked at the Hinner’s organ factory and raised his family in Pekin. Since that time, many of the descendants—including Scott–have lived and worked in Pekin, oft trying to make it a better place for all of its residents through volunteering and holding positions in civic organizations. This same drive to help others is what sparked Scott’s interest in the legal field.

Scott graduated Pekin High School in the early 2000s, playing basketball, tennis, and football. He went on to study political science at the University of Illinois at Urbana-Champaign, graduating in 2005. During college, Scott spent five months in Washington, D.C., working on Capitol Hill as an intern learning about the legal system and providing tours of the Capitol to visitors. After graduation, he attended Southern Illinois University College of Law, graduating in 2008.

Outside of his law practice, Scott has been very active in the community and is committed to his role in giving back through civic leadership.  He has been a past board member of the Children’s Advocacy Center’s Friends Board of Direction and is a past President of the Pekin Area Chamber of Commerce.  He is a current member of the Dirksen Center Foundation Board, which focuses on promoting public policy initiatives and public involvement in the political process.  He also volunteers on the Pekin Park District Foundation Board, which manages funds for the improvement of the Pekin Park District.  Scott, his wife, and family live in Pekin.

Through critical understanding and a wide breadth of practice in the 10th Judicial Circuit, Scott listens to clients and is committed to achieving the best possible outcome in court. Call for a free consultation with the caring hammer today!